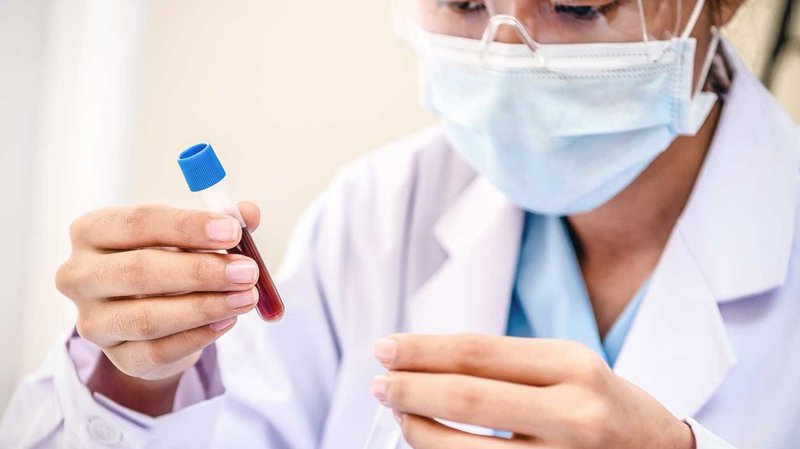 The blood lactate test is one of the highly rated tests in the monitoring and diagnosis of many diseases, especially for emergency resuscitation patients.

1. What is a blood lactate test?

The blood lactate test is a test conducted to measure the amount of lactate in the patient's blood, in rare cases in the cerebral fluid.

Lactate is a product created during cellular transformation. Sometimes lactate may appear as lactic acid depending on the pH. However, the human body has a neutral pH so often appears in the blood in the form of lactate.

In normal humans, lactate levels in the blood and in the cerebral fluid are usually low. Only if the cells do not have enough oxygen or when the energy production path in the cells is broken, then red blood cells, muscle cells, brain and other tissues will produce excess lactate levels.

When a person's body develops a significant increase in blood lactic acid levels (or increased lactate) may progress to lactic acidosis. Severe lactic acidosis can lead to a balanced breakdown of acids and bazo, causing symptoms such as nausea, vomiting, sweating, even coma.

Therefore, doing a blood lactate test can help control the increase in lactate in the blood and take timely interventions.

There are many causes of increased blood lactate, however based on the mechanism that causes lactic acidosis can divide these causes into 2 main groups.

The most common is type A lactic acidosis due to insufficient oxygen absorption or decreased tissue perfusation due to reduced blood flow, e.g.

The second group is lactic acidosis type B, which is caused by an excess of oxygen demand or metabolic-related problems:

Most often, the patient is prescribed a blood lactate test if one of the following symptoms appears:

4. What diseases does a blood lactate test help diagnose?

Blood lactate testing is of high value in the diagnosis of infectious infections:

In addition, blood lactate testing is also useful in finding and identifying the causes of metabolic acidosis and increasing anionic voids:

In particular, blood lactate testing is used extensively in emergency resuscitation as a pred factor. When the concentration of lactate in the blood is higher than 30mmol/L, it can be said that the risk of death is inevitable.

Blood lactate test results are considered normal if the lactate/plasma TM value is between 5 – 15 mg/dL.

Where the blood lactate value is high, it means that the person's body is creating accumulated lactate. In other words, the higher the lactate level, the more serious the condition. In particular, if lactate increases accompanied by hypoxia can be a sign of dysfunction of the muscles.

However, lactate excess is usually not of diagnostic value because it does not help determine the cause of this increase, but is only the basis for the doctor to be able to exclude or confirm the reason for the existing symptoms of the person. In order to find the cause and diagnose the disease, the doctor will need to have a physical examination, a combination of the medical history and the results of other diagnostic tests.

Some drugs can increase the concentration of lactic acid in the blood. Therefore, the patient should inform the doctor if alcohol, sodium bicarbonate, adrenalin or glucose is used.