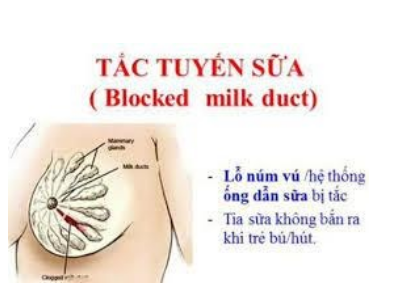 Milk obstruction is quite common in post-birth mothers, because the milk gland system is clogged so that milk cannot flow out. If not treated in time, it will reduce the amount of milk secreted daily, in addition to causing stagnation of milk in the glandular ducts that are prone to inflammation of the mammary glands, breast abces and can cause fibroids or mammary fibroids later

The purpose of the therapeutic treatment of milk rays is to dissolve the crowded stagnant milk positions, help circulation of the milk glandular system and limit the appearance of new positions that will solve symptoms and limit the consequences caused by congestion such as : inflammation of the milk glands, mammary glands, fibrosis of the mammary glands.

The treatment of milk congestion is to use ultrasound waves with the appropriate frequency depending on the location and level of milk blockage for treatment.

Treatment: 1-5 times depending on the degree of blockage (If new, the treatment course will be shorter)

The duration of treatment is 30-45 minutes at a time.

Milk congestion can be repeated during lactation, so mothers need to pay attention to a number of problems to avoid clogging milk :

Post-birth milk blockage is very common, if not detected and treated in time will lead to very dangerous breast anesthgrams. For safe and effective post-birth milk congestion treatment, you can contact the rehabilitation department of Share99 International Health Hub for specific treatment for each case. The Department of Rehabilitation is fully invested, with a complete and abundant system of equipment and physical therapy machinery originating from the world's leading manufacturer of physical and therapeutic equipment such as the Netherlands; Japan….

A team of technicians who are formally trained, at university and college level, have worked in the rehabilitation department of major hospitals. In addition, from time to time, the faculty also has the strengthening of foreign technicians who cooperate in working and exchanging experiences. The care help force is always ready to assist patients in moving for safety.