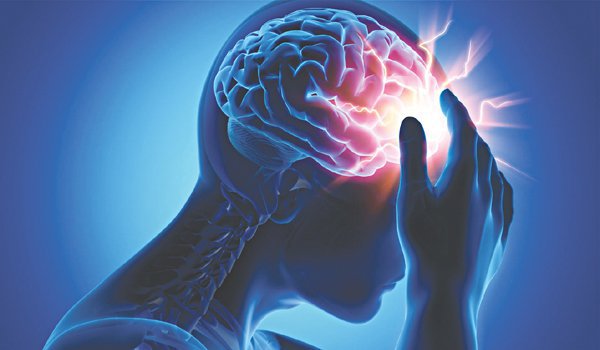 Non-traumatic srachnoid bleeding (SAH) is a cerebral bleeding stroke usually caused by a vesic (berry-shaped) aneurysm rupture and accounts for about 3% of all strokes.

Typical SAH manifests it himself with a severe and sudden headache (often described as "the worst headache in life"), which is different from a daily headache, and is often accompanied by loss of consciousness, nausea, vomiting, photoast, and neck pain. A small percentage of patients may have headaches without much or no other symptoms attached (guard headaches) and may not go to the doctor or be misdiagnosed, thus being missed, with a high risk of a life-threatening major re-bleeding in a short time (several hours to several days). Other less typical manifestations may be seizures, encephabby, and associated epidural hematoma with or without head injuries (since fainting is associated with SAH), which may make the diagnosis of SAH due to aneurysm rupture more difficult.

Physical examination should include determining the patient's level of consciousness and Glasgow coma, assessing meningeal signs, and localizing neurological deficiencies. In cases where the manifestation is not common or unclear, a scan of the bottom of the eye may help. Bleeding in the eyeballs that are accompanied by SAH (Terson syndrome) is associated with an increase in mortality and can be seen in 40% of SAH patients.

Transient increase in cranial pressure (ICP) is the cause of nausea, vomiting, and fainting and may be accompanied by post-SAH cardi lung complications. Bleeding in the eyeball during Terson syndrome is believed to be caused by a sudden increase in ICP. Aggravated and prolonged ICP can lead to coma and rapid neurodegenerative failure leading to brain death.

Many diagnostic methods can be used for SAH diagnostics

The fastest and most reasonable initial diagnostic test possible for patients with suspected SAH is a comoclassical scan of the head that does not inject photocracy. It is important to relate the first CT result to the ons headache ons initiate, as the sensitivity of the head CT changes in the first 7 days from 93% (the first 6 hours), to almost 100% (the first 12 hours), to 93% (the first day), to less than 60% (the first 7 days). Characteristic manifestations of increased blood-form proportions in the base tanks or foundation grooves, inter-hemisphere grooves, and inter-cerebral grooves should immediately suspect an aneurysm cause. In fact, any SAH on the head CT, especially without a history of head injuries, needs to be probed immediately. In addition to the presence of SAH, the doctor should also assess on the head CT the presence of cerebral effic spillage, bleeding in the mediasty brain, and bleeding in the brain.

In case the head CT is negative or unclear and still suspects multiple SAH, lumbar puncture is the recommended next step immediately. Open pressure should be measured regularly. To distinguish the bleeding caused by poking into the blood vessel from the actual SAH, the cerebral fluid needs to be taken 4 consecutive tubes, the number of ryees is measured in ampers 1 and 4. Encephainal fluid should be assessed with close observation with the naked eye and, if possible, spectrossures, for greater diagnostic accuracy than just observation with the naked eye.

The yellow chroma requires about 12 hours and may not be visible if lumbar puncture is performed earlier after the on onsle of headaches. Most hospitals do not recommend spectrosic measurements, and it is not clear what the false negative rate of yellow chromochromochroma is at different times after the on on ons start of SAH.

CT and head MRI are considered to have equal sensitivity in SAH detection in the first 2 days, except in the first 6 hours of post-SAH levels, at which point the head CT may miss a small percentage of SAH and MRI may be slightly more sensitive. Because of the rapid imaging results, many places have an emergency department camera available, and very high sensitivity in the first 2 days after SAH, head CT remains the diagnostic method of choice for early-stage SAH. However, hemosiderin-sensitive MRI pulse sequences (gradient recalled ech[GRE]o and susceptibility-weighted imagi[SWI]ng) or FLAIR pulses are more sensitive to detect semi-level or chronic SAH than head CT. In addition, brain resonance imaging can be useful in distinguishing these disease mechanisms, such as arteriovenous malformation and inflammation, infection, and tumors.

2.4 Determination of the source of bleeding

Vascular imaging will be the next step in all patients with a diagnosis on head CT, lumbar puncture, or MRI. The gold standard of vascular imaging is still background digital cerebral anethorization (DSA). Vascular CT (CTA) can be widely used and is currently used by many places as a vascular image method first. Depending on the technique, cutting layer thickness, and image processing, the sensitivity and specificity of the CTA can be 90% to 97% and 93% to 100%, when compared to DSA, too. However, the CTA may miss small aneurysms ≤ 4 mm.

In intensive centers for aneurysms and strokes, DSA is available for diagnosis and treatment. In the author's hospital, 2-way and 3-dimensional DSA is closely followed as a gold diagnosis for aneurysm as soon as the SAH diagnosis is established; The CTA is often ignored in the author's hospital to avoid further exposure to radiation, contrast iodine, and its ability to cause counterctoric reactions and kidney toxicity. Patients with a negative first-time DSA should be given a DSA scan 7 – 14 days after the first scan. In addition, in first-time negative DSA patients, brain MRI and, depending on the SAH location, cervical spine MRI should be performed in search of arterial malformation of the brain, brain stem or spinal cord.

2.5 Srachnoidal bleeding around the middle brain

Approximately 15% of SAH patients have a negative image result for the origin of bleeding, of which about 38% are SAH around the middle brain not due to an aneurysm, a special body of non-traumatic SAH with bleeding limited to the tanks around the middle brain. Clinical course has been reported to be more benign, although clinical case reports have been published proving that there are rare cases of small aneurysms in the later revascular ring, creating windows of vertebrae and substrate arteries, or pre-arterial myeloid abnormalities. So the DSA should still be photographed. In the author's hospital, an MRI of the brain and cervical spine, as well as DSA repeated about 7 days after the first scan, was performed in all cases of SAH around the middle brain. Patients with SAH around the middle brain are monitored in a lighter unit and, if no bleeding is found, discharged after 8 to 10 days in the author's hospital, as long as their hospitalization process has no complications.